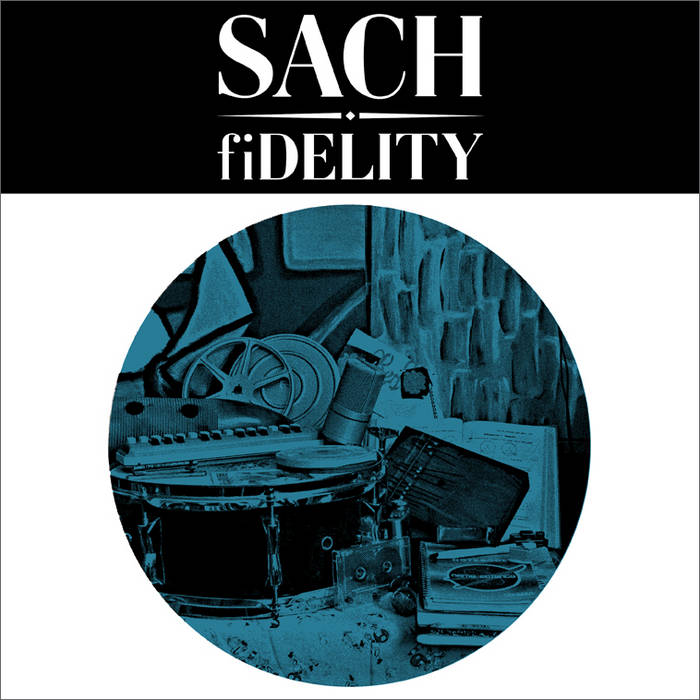 This nine-song EP was recorded in Fall 2015 utilizing a new 24-track supplied by Sach's long-time contemporary Giovanni Marks (aka Subtitle). The results are an eclectic progression of his laid-back jazzy production style & delivery first introduced back in his formative years with The Nonce. Live drums, bass & saxophone were woven into 'fiDELITY", alongside scratching & percussion by long-time accomplice DJ E-Spinfiniti. Album highlights include special guests Mean Green (on the smoker's anthem 'Wise Buds Being Broken') and Koko on the exuberant "Cha Cha (In The Lounge With Sach)".

2017's "fiDELITY: Deluxe" are unique bundles of vinyl, tapes and cds featuring a second pressing of the 10" vinyl (now in classic black), and the brand new "fiDELITY Suite" EP [HNR72] containing the previously unreleased "Symphony", six instrumentals culled from the album sessions, and a live set on November 25th, 2016 from "REPEAT OFFENDER #11" in Los Angeles.

It’s the small, deliberate changes and improvements that are often the key to broader strokes of long-term success and growth. But what happens when those small changes aren’t small or deliberate but accidental, immense and immediate in their payoff? What would that sound like?

In 1995 when The Nonce released their full-length effort, World Ultimate, a precedent was set in terms of the smooth, jazzy production that Sach would be known for. It was a lo-fi, 4-track sound that defined him as a producer – the laidback, poetic delivery was what defined him as an MC. This format, this musical schematic has been the artistic blueprint and foundation for what he’s laid out in numerous projects since then.

With fiDELITY we find ourselves faced with an ambitious project that wasn’t purposeful in how it was produced. No design or grand plan came into play in its initial creation, instead it was organic, birthed from artistic experimentation. It’s intentional, without being intentional. What we have is live source impressions of a Hip Hop Jazz record. Sach has “never done a record like this where there’s this much live element in it – it’s not live but it’s giving you an impression, a smooth jazz impression,” that’s a purposeful-accidental graduation from his tried and true TASCAM 8-track Portastudio.

A Roland Digital Studio Workstation, a significant upgrade of a home recording studio, that had been collecting dust for years was serendipitously entrusted to Sach (Giovanni Marks)and this was the catalyst behind the album. This led to an exploration in recording, miking instruments and ultimately experimenting with myriad of instruments. A paradigm shift from an 8 track frame of mind to a 24 track recording took place. Armed with an updated technology for sampling, chopping and looping analog sources, it was as if a sort of metamorphosis was taking place. New ideas came and the desire to play and record sounds from instruments collected over the years set in motion a more grandiose plan. What can I create with this guitar, this guiro, this melodica, harmonica, and these homemade shakers? A project was born. Though, initially, it was a project for no one other than the artist. It was never meant as something to be shared and reproduced at first. It was “a project for me, just for me, I got this new machine and I’m going to do a project for me. I was gonna record some 24 track music – every sound, every kick, every snare.”

In an empty duplex in Lomita, CA a drum kit was set up. The windows opened, the breeze coming in filtered through the shading trees around the perimeter acted as the first audience for these initial sessions. This was the ambiance for the first few stages of the recording process. Cool. Relaxed. In the beginning it was Sach and drummer, Kiefer Hyder, recording the percussion sounds that would later be chopped and looped to create the backbone of this musical adventure. Every kick and snare that you hear was recorded analog, played on an actual drum kit but rearranged and aligned in way where the live feeling was kept but the composition was new.

As a fan and acolyte of the Jazz greats, a direction for the type of sound that was desired made itself known when - during this same time - a new needle was purchased, thus allowing him to be reintroduced to records that would set the tone for what he knew he wanted.

With the beats laid out and this new/old sense of directive, the rhyme writing flowed out with ease. Each song wrote itself, born from these feelings of Jazz nostalgia and empirical recording and tracking sessions.

The next step was to bring in other instruments, sounds and a DJ to complete the structure of this opus. DJ ESP was brought in to lay down some scratch work over “Flow fiDELITY” but what he contributed was so much more. Here, another instance of accidental and non-deliberate additions to a project that had no preconceived notions to what it would become, occurred. On the day he arrived at the duplex, ESP – with no request or direction – came in with a bag filled with an array of instruments: percussion, bells, and Tibetan Singing Bowls. Each of these was miked, recorded and chopped. You can catch several of these nuances in “Over The Under” which ends with the metallic sound of a Singing Bowl. In Tibetan Buddhism, these tones are used for meditation and healing and it’s no wonder that a sense of alleviation is felt while listening – similar to the effects of binaural beats.

Next, J Sumbi, Good Life MC and producer, was brought in to play electric bass. To have an artist like that adding his musical input and knowledge, it’s no surprise that what he contributed was more than just bass chords. This is a man who had a heavy hand in early Freestyle Fellowship and Nonce work. Full circle.

The last piece of the puzzle was to incorporate a saxophone. Jack-of-all-trades, Renaissance man, Anacron, was asked to bring his ax to the duplex and add that last element of jazziness to the project - the final piece, captured to make what was once accidental purposeful.
The 8-track worked. What Sach was creating prior to this project with his portable TASCAM followed a formula that garnered fans and respect as a producer. Though, in retrospect, it was like creating with “tunnel vision, like watching a black and white movie or cartoon and it starts looking like color at some point because it changes in your mind” – it’s good but what if color was added? This project represents the addition of color into a black and white backdrop. This is a precise reproduction of sound, recorded live but not a live recording. It’s a culmination of happenstance, upgraded technology, nontraditional use of instruments and an exploration into the limits of acoustic sound. Despite the fact that this was, at the beginning, a personal record not meant for us, it was, somehow purposefully created just for you. This project is a true illustration of the profound results that can be made manifest through simple changes. Here we witness the beginning of long term growth as an artist and a producer. This is fiDELITY.

Written, Produced and Recorded By Sach
Published by Former Square

All Songs Edited, Mixed and Mastered By Deeskee
Live Drums By Kiefer Hyder
Scratching And Percussion By DJ E-Spinfiniti
Saxophone By Anacron
Bass By J. Sumbi
Meen Green Appears On ‘Wise Buds Being Broken’
Koko Appears On ‘Cha Cha (With Sach In The Lounge)’
Extended Mix on "Much To Bear" and "Cha Cha" by DJ E-Spinfiniti

Bandcamp Daily  your guide to the world of Bandcamp

outré black metal, with a Victory Over the Sun interview and music from Liturgy and Jute Gyte.